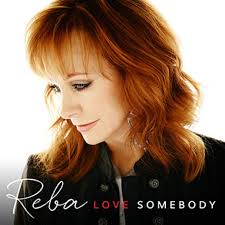 She has written two wonderful autobiographies, starred on Broadway and in films and television programmes. Recorded 40 odd albums and she has toured the world with her lavish and extraordinary concerts. She has been a mentor for many young women within and outside the entertainment industry.

She has dared to be different and she has challenged the best. Reba is a winner. She hasn’t always had things her way, she has had her struggles and her tragedies amongst the triumphs and the victories but she always rises above the crowd, no matter how great that crowd is.

I think that Reba has one of those rare voices in the world that you recognise straight away. She has a distinctive and incredible voice that is hers alone.

In the reviews that I have read about this album, people have said that this is her best album of the 21st century. Others have said that Reba is at her best when she doesn’t try to please the media and the radio. Others say that at 60 and with the body of work that she has behind her, there is nothing left to prove. Still others say that at 60, she is proving that she still has a lot to say and that she is as relevant now as she was in the 90’s.

Nobody sings a sad song like Reba. She can make you feel more in 3 minutes, 25 than most people can in a lifetime. Denise Drysdale asked Reba once in an interview how she gets that crying sound in her voice (she actually attempted to demonstrate it rather than describe it!) – Reba looked at her dumbfounded for a minute and then she realised what she meant. “it all comes natural like”, she finally said, and that is the secret with Reba….it all comes natural, like.

There are 14 tracks on the deluxe edition. It is a mammoth album which has a mixture of what Reba does best and what people expect of Reba – a few surprises.

I am just going to talk about my favourites which, surprise, surprise are ballads. Love Land – about the struggles of a young couple. She got drunk last night – a story which was never going to have a happy ending. That’s When I Knew – knowing when a relationship is over and when you meet the one that makes you realise that you are over the other one. Enough – a duet with Jennifer Nettles from Sugarland – a thinking that you are not good enough song, and sticking it out despite all the bad times. Just like them horses (my favourite), a tribute to her late father – Reba at her absolute best.  Promise me love – great melody and effective echo…..clever lyrically and catchy as all get out. More than just her last name – about what a woman gives to a marriage and what she leaves it with.

Reba explores many different types of phraseology and musicology on this album as she often does. Strangely, as much as Reba tries on new shoes, you still get the feeling that you are putting on those comfortable old shoes when you listen to her albums. Her music will always have the integrity of country music, whether she sings it soft or loud. There will always be messages, there will always be lessons. Long live Reba. Sixty years young and still going strong.