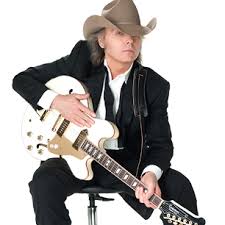 I went to see a Dwight Yoakam a few years ago in Sydney, his first visit for 27 years. He said that he had 27 years to make up for and he sure made up for them, playing for nearly 3 and a half hours after the supports. They don’t come much more country than Dwight. He’s had a life, it has been somewhat of a wild ride on stage, on screen and on the record as well as off stage, off screen and off the record, if you know what I mean…..

Heavily influenced by Buck Owens and other old cowboys, Dwight has stayed true to himself and his beliefs in music and beyond over the years. He has never waivered. He has never “Sold Out”. There’s more than a bit of Elvis in him, not that it shows in every track, but it does show. There’s old Buck and Waylon and the boys….I wear my t-shirt proudly, because from the front, with his cowboy hat dipped, he could be anyone from Alan Jackson (more than a few people have mistaken the pic for him) to Tim McGraw to our own Dan Murphy or Travis List. People don’t believe me until they look at the back of the t-shirt and see the tour dates. I think that is his intention. He’s every cowboy.

There are only two covers on here: Vs of birds by Anthony Crawford and the traditional Man of Constant Sorrow which is almost unrecognisable. The rest is pure Dwight…here are she be:

In Another World: Dwight means guitars. First up there is a power guitar riff, which he is always strong on. It lights the flame on the album. One reviewer suggested that Dwight writes songs that help him figure out and get through his broken relationships….perhaps. Bring out the air guitar.

She: Not The Monkees song or the Charles Aznavour song. This is all Dwight. It does seem to channel a Rolling Stones riff or two though! This whole album, or at least big chunks of it has a sixties sound.

Dreams of Clay: Starts with a riff reminiscent of Suspicious Minds. Dwight has done this before in a song or two. This is a dynamite song. Dwight at his best. Apparently, it had been lying around for a while and he finally decided to do something about it. See if you can identify the riff….I am sure that you can.

Second Hand Heart: The title track. Channelling Rolling Stones again with a riff or two or the Travelling Wilburys! Dwight’s voice is so country that he could sing La Boheme and make it sound like it was born in Nashville.

Off your mind: As country as the smell of fresh cow poo in the morning. A little bit Roger Miller, a whole lotta Dwight.

Believe: A little bit sixties….well okay, a lot bit sixties. Twanging guitars, great words, sounds like something that The Byrds would play. Oi, but it still sounds country!

Man of Constant Sorrow: As I said before, this traditional song is hardly recognisable. I am still a big fan of the Dylan version but this certainly sees this song from the other side. Sort of rockabilly or cowpunk as one reviewer described it.

Liar: A little bit more like the Stones, here! Hey Country and 60’s….the best two kinds of music….they make could partners….I think that we need to find this fella a wife. Well, maybe not, we wouldn’t have all of these cool songs.

The Big Time: Time to get out on the dance floor. Get up and dance and have a good time. Channelling Elvis.

V’s of Birds: Total change of pace. The Anthony Crawford penned tune. Close your eyes and you will see the birds flying above you. Fits Dwight’s voice like a glove, a little Van Morrison – like, a bit like The Band. Unreal song. Great way to finish a super album.

I have almost every Dwight album. He has a sound that shines through every variation that he attempts. He has a voice that is distinctly his, like there is only one Reba, one Trisha, one Johnny, one Kris. He experiments a bit, but he is never a Benedict Arnold, he is always true to his music and to his fans.

Heard a rumour that he is coming back to Australia for a visit. Make sure that you catch him LIVE. He will not let you down.